skip to main | skip to sidebar

Firsts...good ones and bad ones 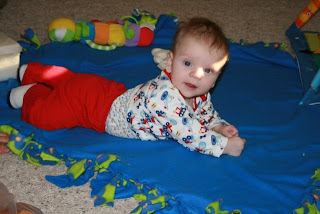 Good: Thomas rolled over for the first time this week!!! This is a photo taken immediately after his second time rolling over. The first time he couldn't figure out how to get his arm out from under him but now he has that down! He probably rolled over 6 times today. Whenever we tried to put him on his tummy for "tummy time" he would loudly protest but now that HE is the one putting himself on his tummy he is pretty happy with it. 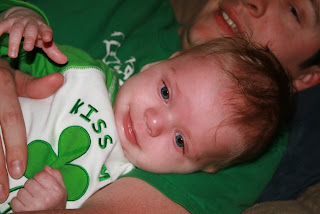 BAD: The little guy was "sick" for the first time. He has had some digestive issues...I will spare you the oh so gross (and green...fitting for St. Patty's day) details. Poor little man has been in a little pain during the process...but only when he is trying to go. The picture above I just happened to catch him in the act, poop face or as Aunt Megan calls it "cherry tomato"! We did call the doc's office and talked with a nurse who suggested switching to soy formula and me eliminating dairy. If he wasn't better in a week we would call the doc back. He seemed a good bit better today and didn't have quite as much discomfort or as many diaper changes...good sign. 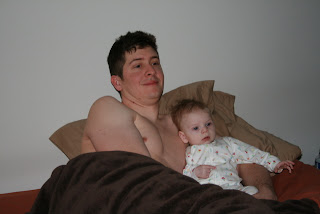 This was taken this weekend after we got up Dad turned on Star Wars and they watched it in bed for awhile. 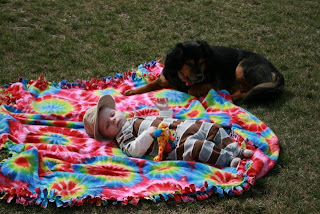 The weather here has been INCREDIBLE the last few days, highs in the upper 60's. Today we ventured outside to play with Mable for a little while. 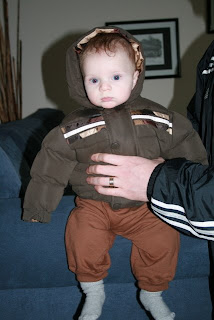 Even though it has been warm it is still early spring in Indiana! Thomas wore the coat his Aunts got him earlier this week.
Posted by MacLeague at 4:34 PM